The highest award for volunteers in the United Kingdom, has been given to the Hope Cove Life Boat. The charity was one of five volunteer groups from Devon to receive the Queen’s Award for Voluntary Service, at a ceremony in Plymouth’s Council House on 9 October.

The Hope Cove Life Boat provides rescue cover for Bigbury Bay and complements Royal National Lifeboat Institution (RNLI) cover in the area. The Life Boat is run by volunteers as a registered charity with no funding from the government or any other organisation.

“It would be impossible to single out any individuals or groups of individuals, however, I am going to make special mention of ‘The Crew’. Without the ceaseless efforts of the crew, the craft would not operate.”

Cllr Kathy Cuthbert, South Hams District Council’s Chairman said: “I was pleased to attend the ceremony and to witness Hope Cove Life Boat receiving such a prestigious award. We are very proud of the charity and we praise its achievement and outstanding work. Many people and the broader community have benefitted from years of Hope Cove Life Boat’s dedication. This award is definitely well-deserved.”

The Queen’s Award for Voluntary Service is the highest award given to volunteer groups within the United Kingdom and is the equivalent to the MBE. This national honour was first announced in April 2002 to mark the anniversary of the Queen’s coronation. The award is presented every year to a select group of winners.

This draft will be discussed at the next Parish Council meeting on 13 December 2017, will be published in the Bigbury News and placed on the Community Website.

We want to ensure that the Vision and Objectives of the Neighbourhood Plan are truly representative of what the community want and would like to encourage parishioners to read the draft, set out below (click on the link below to the VISION AND OBJECTIVES – a MS Word document), and to let us have your comments.

Comments
Please could you let us have your comments by Friday, 12 January 2018.
A comments box has been placed at the Holywell Stores or alternatively these can be sent direct to Valerie Scott, Chairman of the Steering Group. Valerie’s contact details are set out below.
Valerie Scott
Address: Glen Cottage, Bigbury, Kingsbridge, Devon, TQ7 4AP
Email: valeriescott@bigbury.net

SPOONBILL SEEN ON THE AVON ESTUARY 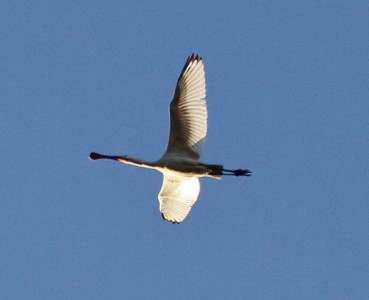 John Ashton (of Aveton Gifford) recently captured these excellent photographs of a spoonbill around the Tidal Road. The species was last seen here in the 1980’s according to local bird expert, Rod Bone. 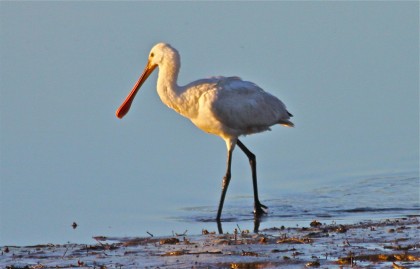 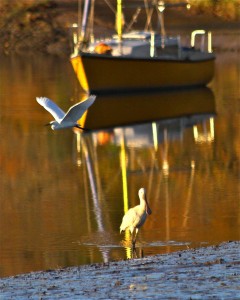 A local resident has reported that there is Palm Oil  washed up on the beach at Ayrmer Cove.

If so, no doubt it will also be along our immediate coast line.

Please stay alert and remember if your dog eats this it could prove fatal!

Anybody with an interest in the Avon Estuary is invited to the forthcoming Forum.  See link below for details:-

LIGHT POLLUTION IN OUR AONB – BE AWARE!

We’re all familiar with the rubbish left on beaches and in our lanes but do you ever consider the effects of light pollution in our beautiful environment?

Rise in Speeding on Salcombe Harbour

Despite the highest allowed speed in the harbour being 8 knots (9 mph), some vessels have been stopped for travelling at speeds of over 30 knots (35 mph).  The areas affected by speeding are Salcombe Harbour, including the estuary right up to Kingsbridge, the ‘Bar’ and Harbour entrance but also in South Pool Creek and Widegates.

The Salcombe Harbour Master, Adam Parnell said: “My team has stopped 35 boats for speeding, and some have been travelling so fast that our patrol boat, which can do in excess of 35 knots, has struggled to catch up.

“We know that this number represents the tip of the iceberg. We receive many calls and emails from members of the public who witness speeding, but unfortunately they often don’t tell us until hours or even days later, so it’s often too late to do anything about it.”

To deal with the rise in speeding, the Harbour Authority is increasing additional speeding patrols both at the Bar and in Widegates. “It appears that not only are these vessels speeding, but they’re not even aware of who and what is around them, and that’s a real concern,” said the Assistant Harbour Master, Cameron Sims-Stirling.

“What is particularly disappointing,” said Cllr Julian Brazil, Chairman of the Harbour Authority, “is that many of the vessels the team stop, are actually locals who should know better.”

All vessels caught speeding were given either a verbal or written warning, but in the worst cases, they received a formal interview under caution.

“A lot of people don’t realise that speeding is regulated by Harbour Bye-laws, a breach of which is a prosecutable criminal offence” said the Harbour Master. “Unlike speeding in a car, which is a civil offence, the helm of a speeding vessel can end up with a criminal record and be fined up to £1000.”

“They don’t realise the damage that their wake is causing behind them.  We’ve had reports of paddle-boarders being washed off their boards and smaller vessels capsized.” The Authority is particularly concerned at reports from local marine businesses that the poor behaviour of a few is having on the reputation of Salcombe as a safe harbour, with paddle-board companies concerned for the safety of their customers.

Anyone witnessing a speeding vessel is strongly encouraged to report it to the Harbour Office as soon as possible so that the appropriate action can be taken.  You can report this by phone on: 01548 843791 or by Twitter @Salcombeharbour.

Whatever your views about the proposed changes to Bantham, users of the Bigbury Community website may be interested to know about the Save Bantham resources, including information and updates.

The Save Bantham website provides key information about Nicholas Johnson’s change of plans from no change to significant development, which will affect residents and visitors alike. You may love the proposals or you may hate them but at this stage the proposals are just that, no formal planning applications have been made.
http://savebantham.uk/bantham-development-plans/

The Save Bantham Facebook page gives an opportunity for open discussion about issues with changes to the privately owned estate that may directly impact Bantham, or have a knock on effect for surrounding communities. E.g increased parking charges, or closing the whole car park out of hours may cause more traffic for those accessing the coast at Bigbury on sea etc
https://www.facebook.com/savebantham/?hc_ref=ARSio4pzF5iC7ATQURun9ir9T-_74uCNZ8PGB_ocVeL85R_b4gyN7_qlcC9f29ltGhU&fref=nf

The Save Bantham weblink has been added to our LINKS page.