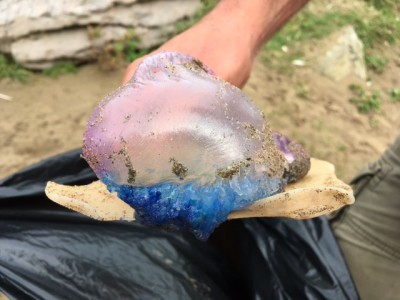 Many of you will be aware of the recent reports of Portugese-man-o’war specimens being found on beaches of the South West.  Well, Bigbury-on-Sea is not immune!  One dead specimen of the potentially dangerous jelly fish was found washed up on the beach during our very successful beach clean on Saturday .  Although the specimen was dead, the tentacles could still deliver a very painful, potentially dangerous sting, of course, so extreme care was used in getting rid of it.

Meanwhile, thanks go out to all the volunteers who gave an hour to help clean our beach and to Amanda Keetley from lessplastic.co.uk and Surfers against sewage, who organised the event. 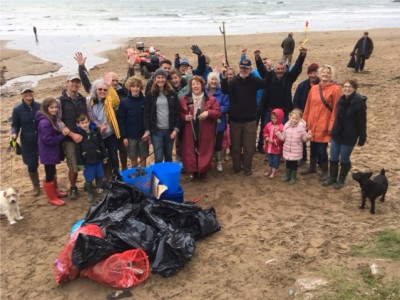 You can find out more about the Portugese-man-o’war via the following links:- https://en.wikipedia.org/wiki/Portuguese_man_o%27_war

THEFT OF 9 PADDLE BOARDS at Bigbury-on-Sea: can you help?

We are devastated – at least 9 of our Red Paddle Ride stand up paddle boards were stolen last night out of our van parked outside the Discovery Surf School shop at approximately 7.30 last night (Wednesday 27th September) This happened not long after we locked up following lessons. Please share and get the word out, maybe they’ll try and sell them or someone out there may have seen something suspicious?

This occurred last evening and hence someone is likely to be trying to sell these on.

If anyone saw anything suspicious no matter how small please contact the Police on 101 or let me know and we will refer on. Obviously if you have any knowledge as to the whereabouts of these boards or have any information at all please contact 101 or you can report anonymously through Crimestoppers on 0800555111.

Regarding the recent theft from the Discovery School does anyone know if any of the owners of properties overlooking the access road or car park at Bigbury have a CCTV camera?

It has been established that this theft occurred between 8pm and 9pm last evening.

The thief may have been waiting for the owners ( who live in Bigbury) to lock up and must have been parked nearby.

He did not take the rigid boards only red 10′.6” inflatable paddle boards so may well have deflated them in order to remove them.

Any suggestions as to any other potential cctv footage?

If you’d like to help keep the beaches around the estuary free of rubbish, you can come along on Saturday 30th September at 10.00am for a 1 – hour beach clean. The event is being organised by Amanda Keetley from ‘Less Plastic’ in association with ‘Surfers against Sewage’ and is being supported by Venus cafe, who will be providing free tea/coffee for volunteers (please BYO reusable mug!).

Meet on the beach below the free (surfers) car park, at the bottom of Folly Hill at 10.00am.   HW will be around 1350. Please come suitably attired and observe our usual safety precautions (see guidelines at http://auneconservation.org.uk/wp-content/uploads/2010/04/ACA-BEACH-CLEANS3.pdf). Gloves and bags will be provided.

I hope to see you there!

Whatever your views about the proposed changes to Bantham, users of the Bigbury Community website may be interested to know about the Save Bantham resources, including information and updates.

The Save Bantham website provides key information about Nicholas Johnson’s change of plans from no change to significant development, which will affect residents and visitors alike. You may love the proposals or you may hate them but at this stage the proposals are just that, no formal planning applications have been made.
http://savebantham.uk/bantham-development-plans/

The Save Bantham Facebook page gives an opportunity for open discussion about issues with changes to the privately owned estate that may directly impact Bantham, or have a knock on effect for surrounding communities. E.g increased parking charges, or closing the whole car park out of hours may cause more traffic for those accessing the coast at Bigbury on sea etc
https://www.facebook.com/savebantham/?hc_ref=ARSio4pzF5iC7ATQURun9ir9T-_74uCNZ8PGB_ocVeL85R_b4gyN7_qlcC9f29ltGhU&fref=nf

The Save Bantham weblink has been added to our LINKS page.

The AONB Estuaries Partnership has produced the following biosecurity plan to help stop the spread of marine non-native species around the South Hams.

The risks of an invasive non-native species in the Avon Estuary are relatively low owing to the regular flushing of the estuary by freshwater but with increases in the number of people and craft using the estuary for recreational purposes, the danger is still present. Please be vigilant and take any relevant precautions, as advised in the plan.

The effects of invasion by Spartina or cord grass in the Avon Estuary after artificial introduction by Man are all too evident in the steady accumulation of silt and mud. Multiplication of the Pacific Oyster outside of the farmed racks in our estuary is prevented by limiting the externally-sourced juveniles to triploid (infertile) individuals.

Check out our LINKS page for details about sports activities, eating out, environmental concerns, etc.

If there are useful links missing, just let us know via the CONTACT US tab. 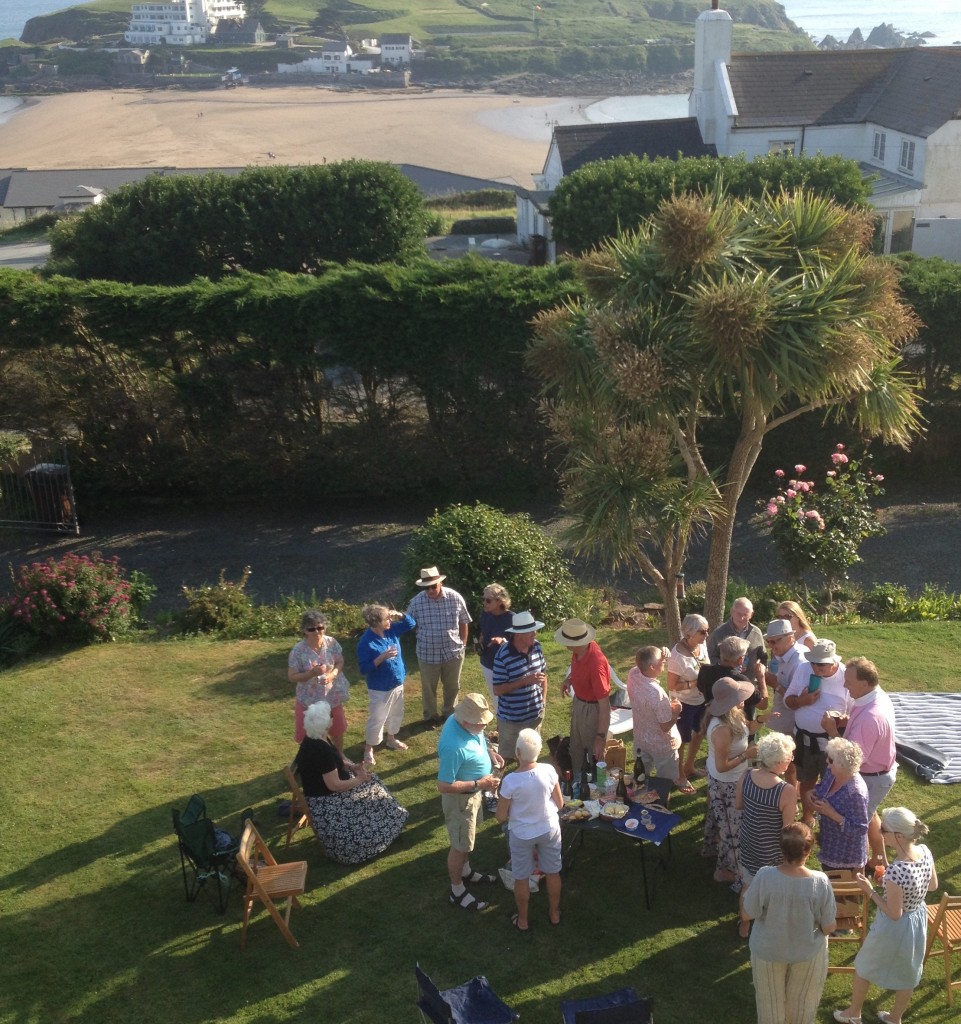 There was an impromptu gathering of parishioners at ‘Mariners’, home of Pat & Jim Chadwick, immediately above Bay Cafe, on 20th June to celebrate the listing of Bay View Cafe as an Asset of Community Value by SHDC. The gathering took place at very short notice and, therefore, was only a small representation of the strength of feeling in the parish that the cafe or something like it, should be retained for the enjoyment of this idyllic setting by residents and visitors alike.

THE planning application to replace the Bay View Cafe in Bigbury on Sea with four houses has been refused.

The application, submitted by Nick Bennett, proposed the demolition of the Bay View Cafe building and the development of four detached, four-bedroom houses on the site. A previous application was also refused earlier this year.

South Hams District Council refused permission on Tuesday, October 11, citing that ‘the proposed change of use would result in the loss of a community facility, tourist asset and an employment use without adequate justification’ and ‘the loss of the community facility, tourist asset and employment use, together with the demolition of a building of local interest considered a non-designated heritage asset, fails to address the connections between people and places and leads to the loss of local distinctiveness and the degradation of the sustainability of the settlement’.

The report states that a third party ‘attempted to achieve listed status for Warren Cottage earlier this year’ and although that was unsuccessful, Historic England acknowledged that the property has ‘local interest’ as it was the ‘first dwelling erected on the mainland’ within what would become Bigbury-on-Sea.

The report also focussed on the ‘community functions’ that public houses and cafes serve in communities, and the fact that they are ‘especially pronounced in isolated rural communities, such as Bigbury-on-Sea’ and that the Bay View Cafe ‘represents the only example within the village of a contained, indoor public area for people living in the village to socialise and gather.’

The report states that ‘the loss of this community facility is in conflict with planning policy at the local and national level’ and that ‘its closure was undertaken by the applicant and does not indicate an absence of proven demand.’

It also recognises that the applicant adjusted the original proposal which led to a ‘more appropriate design response’ but that this was weighed against the ‘loss of the current site, which presents a very specific contribution to the village.’

There were 28 letters received by SHDC in response to this application, one in support and 27 objecting. You can view the proposal and the refusal notice on the SHDC planning website: southhams.gov.uk/searchlanding and search for application number: 1826/16/FUL