The Devon and Cornwall police rural affairs team have produced a calendar which highlights rural issues throughout the year to focus problem solving activity for police, partners and public with key messages and prevention activity, this month’s theme is Illegal off-road riding and driving.

Why is this important?

Illegal off-road riding and driving cause real damage to the landscape, heritage sites and can harm livestock. The use of vehicles off-road without authority is an offence, causes anti-social issues and in some cases the vehicles are uninsured and illegal for use on the road.

What do you need to do?

Under the Road Traffic Act using a mechanically propelled vehicle without lawful authority on common land, moorland, on any footpath or bridleway is an offence. Ensure you have permission to carry out the activity. Members of the public should be vigilant reporting incidents to the police.

How can you prevent this?

• Be aware of where you are riding/driving and ensure you have permission. Your vehicle could be seized.
• Drive responsibly, anticipate hazards, ensure your vehicle is road worthy.
• Landowners can consider securing entrances and the use of appropriate signage.
• Notify the police using 999 if you suspect an offence is being committed and the offenders are still on scene.
• If you have any information about illegal off-road riding or driving please email 101@dc.police.uk, call the non-emergency number, 101 or call Crimestoppers anonymously on 0800 783 0137.
• Join Devon & Cornwall Alert, Watch schemes and local social media groups so that you can find out what is happening in your area.

THIS IS AN INVITATION TO PARTICIPATE IN A REFRESHING OF THE COUNTRYSIDE CODE FOLLOWING THE EXPERIENCES OF COVID-19. SEE LINK Countryside Code Survey 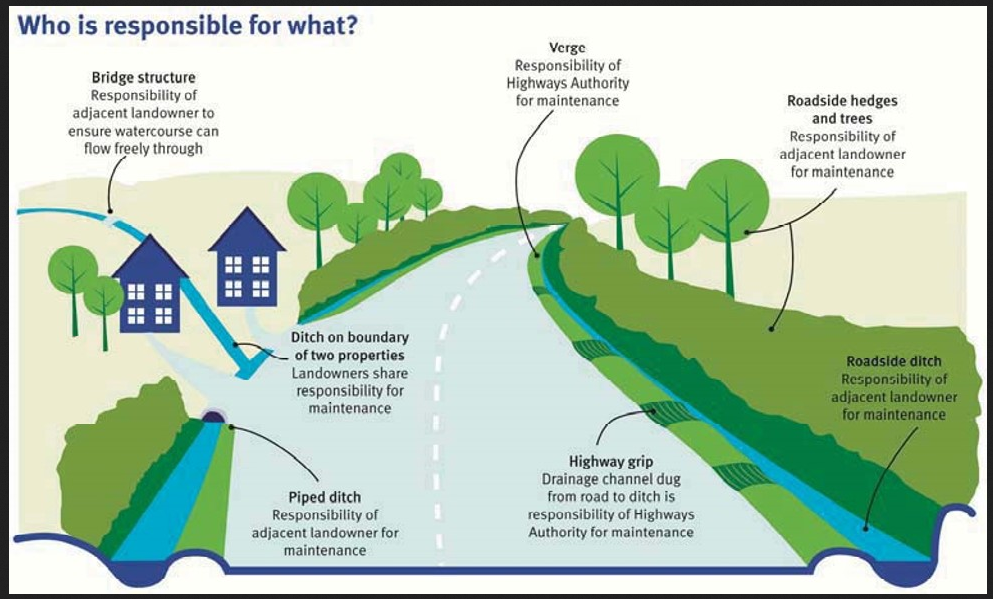 Any confusion about who has responsibility for drainage problems is clarified by this diagram from Devon Highways.

The UK’s Chief Veterinary Officer has confirmed that routine monitoring has detected the H5N8 strain of avian influenza in a very small number of wild birds in Gloucestershire, Devon and Dorset.

Wild geese near Stroud in Gloucestershire and swans near Dawlish in Devon have tested positive for highly pathogenic avian influenza H5N8. In addition, a wild goose near Weymouth in Dorset has tested positive for H5N8 (pathogenicity yet to be determined). Birds were tested posthumously and were found to have been infected with the strain of avian influenza virus which is currently circulating in wild birds in Europe.

The Chief Vets from England, Scotland, Wales and Northern Ireland have urged bird keepers to maintain and strengthen their farm biosecurity measures in order to prevent further outbreaks of avian influenza in the UK. The advice follows a decision to raise the risk level for avian influenza incursion in wild Birds in Great Britain from ‘medium’ to ‘high’ last week.

There have been a number of confirmed reports of avian influenza in wild birds including geese and swans in the Netherlands and northern Germany in recent weeks. These wild birds are all on the waterfowl flyway from breeding grounds in western Russia, where the H5N8 strain was reported in poultry in mid-October.

Wild birds migrating to the UK from mainland Europe during the winter period can spread the disease to poultry and other captive birds. All bird keepers and members of the public are being urged to prevent direct or indirect contact with wild birds.

Public Health England (PHE) advises that the risk to public health from the virus is very low and the Food Standards Agency advises that avian influenzas pose a very low food safety risk for UK consumers. Properly cooked poultry and poultry products, including eggs, are safe to eat.

“An H5N8 strain of avian influenza has been confirmed in wild geese in Gloucestershire, swans in Devon and a wild goose in Dorset. It is important now more than ever that bird keepers ensure they are doing all they can to maintain and strengthen good biosecurity on their premises to ensure we prevent further outbreaks.

“Public Health England has confirmed that the risk to public health is very low and the Food Standards Agency advises that bird flu poses a very low food safety risk for UK consumers.

“We ask that people continue to report findings of dead wild birds so that we can investigate the extent of infection.”

“To date, there have been no human cases of infection with influenza A(H5N8) confirmed by the WHO and the risk to public health is very low.

“Our advice regarding contact with wild birds remains the same – make sure to wash your hands thoroughly with soap after coming into contact with any animal and do not touch any sick or dead birds.”

“We advise that, on the basis of the current scientific evidence, avian influenzas pose a very low food safety risk for UK consumers.

Wild birds migrating from mainland Europe during the winter period can spread the disease to poultry and other captive birds. There are some simple measures that all poultry keepers, whether they are running a large commercial farm, keeping a few hens in their back garden, or rearing game birds, should take to protect their birds against the threat of avian flu.

· Keeping the area where birds live clean and tidy, controlling rats and mice and regularly cleansing and disinfecting any hard surfaces
· Cleaning footwear before and after visits
· Placing birds’ feed and water in fully enclosed areas that are protected from wild birds, and removing any spilled feed regularly
· Putting fencing around outdoor areas where birds are allowed and limiting their access to ponds or areas visited by wild waterfowl
· Where possible, avoid keeping ducks and geese with other poultry species.

Further information on how to help prevent the spread of the disease can be found on gov.uk.

The ‘rapid’ charge points are among the fastest chargers available – EVs should have an 80 per cent charge within 30 minutes, and will be operated by SWARCO and compatible with all EVs currently on the market.

This scheme is the latest example of Highways England’s Designated Funding programme assisting local authorities to improve air quality across the country, helping DCC and district councils to work together to deliver EV charging points along the A38 in Devon.

Currently DCC and the district councils are working to deliver the government-funded Deletti project, the first phase of which aims to deliver at least 25 charging points in public carparks across the county from early next year.

And DCC is working with the private sector on the government-funded ‘Street Hubz’ project which aims to deliver at least 100 on-street EV charging points in Exeter from next year.

All three projects are part of local authority efforts to help reduce carbon emissions in Devon.

They are working together to reduce carbon emissions and create a Devon Carbon Plan – a road map to carbon neutrality.

South Hams District Council’s Portfolio Holder for the Environment, Cllr Keith Baldry, said: “It’s really important to us to deliver as many electric vehicle charging points across the District as quickly as we can. The charging points in Ivybridge are a good starting point towards us reducing our carbon footprint. They are perfect for the town but also for travellers on the nearby A38 corridor. We are committed to our Climate Change and Biodiversity Plan and have already started to change over some of our fleet to electric vehicles.”

Councillor Stuart Hughes, Devon County Council’s Cabinet Member for Highways Management, said: “I recognise the difficulty in encouraging more people to use electric cars until there are more charging points and that’s why we are working closely with our district and government partners to deliver charge points in prime locations such as this.

“While the government has committed to banning the sale of all new petrol and diesel cars and vans from 2040, we want more people to start using electric vehicles long before that. Fewer petrol and diesel cars will lead to a reduction in emissions, cleaner air and an improved quality of life for all residents.”

Highways England Project Sponsor Brian Cull said: “We’re pleased to be working with councils across the country to make more provision for drivers making the switch to electric, and over 95% of England’s motorways and major A-roads are now within 20 miles of an electric vehicle charging point.

Public Urged to be Vigilant for Bogus Green Waste Collectors

The Environment Agency and its partners are concerned about a seasonal trend of green waste fly-tipped near Plymouth and urge people not to be tricked by doorstep conmen into taking away green waste.

Households in Plymouth, South Hams and West Devon are being asked to quiz people knocking on their doors and offering to take their rubbish away.

Waste carriers, like other licensed trades, are required to register and operate in line with a set of rules that protect the environment and their customers. These rules include disposing of waste in the right place, storing it safely and keeping accurate records of transfer and disposal.

If these traders don’t have a waste carriers’ licence, there is no guarantee rubbish will go to an authorised site. Instead, it could end up dumped on the side of the road or burned in a field, causing environmental damage. And the person who hired the unregistered trader could face a criminal charge.

“If people suspect criminal activity, they should report it on our hotline 0800 807060 or anonymously through CrimeStoppers on 0800 555111 and give as much detail as possible. Let’s work together to stamp out waste crime and protect on our beautiful countryside.”

“These awful fly tips blot our landscape and residents need to ensure that their waste doesn’t fall into the wrong hands of contractors who are out to make quick money. It’s our responsibility to check how legitimate waste collectors are, by either checking the Environment Agency’s website or by checking Waste Carriers’ Licences on the doorstep, to make sure waste is properly disposed of.”

All householders have a duty of care to ensure their waste is disposed of legally. Failing to meet the duty of care means that people could be held responsible if their waste is fly-tipped or otherwise illegally disposed of. If this happens and they have not met their duty of care, they could be fined up to £400. Before hiring someone to remove waste, householders should check their credentials online – https://environment.data.gov.uk/public-register/view/search-waste-carriers-brokers.

ENDS
www.southhams.gov.uk
www.westdevon.gov.uk
Please be aware that telephone calls to and from the Council may be recorded for training and monitoring purposes.